Or as the Kids call it -

If you've been here before you may want to check the

"Latest Updates"  or "My Blog" first. 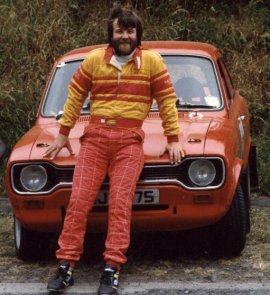 Hi I'm Neil, sometimes known as Dad and even on the odd occasion by a few other choice names. As you may gather from this picture of me with one of my cars my hobby is motorsport in general and Mk1 Escorts in particular. I have been both competing in and organizing motorsport events in Northern Ireland since the late 1970's. Most of that time has been spent driving Mk1 Escorts and the rest of it has been spent fixing them after my many "offs". The Racing Photos give a pictorial account of some of my activities, dubious and otherwise over these past few years. The HAVOC Stories are articles about some of my motorsport exploits that I have written for the Ford AVO Club's magazine, HAVOC, then there's the Big Bangs, well I'm sure that no one could compete in around 25 motorsport events of one type or another every year for almost twenty years without a few crashes, bangs and wallops only I seem to be having a lot more than a few! Maybe that's because middle age has now caught up with me. If you have a look at the Escorts you should find some of my favorite Escort photos, some of which I've taken myself and a few that I've found here and there. I might even include the odd non Escort photo if it's one I really like.

As you will read in the HAVOC Stories I am currently semi-retired from rallying, I hope to make a return later this year. To that end I am at the moment involved in a major rebuild of my rally car and you can see our efforts in The Rebuild. I have also included a page called Other Cars and this has some other interesting photos that I have taken or found, there may even be photos of Escorts taken at various shows as well as some general interest car photos.

The latest page that I've added is titled Bits and Pieces. This page is a collection of photos and information on many of those rare or obscure bits that I've collected over many years of involvement in motorsport. Also included are some things that I have bought over the years just because I thought they were really nice bits of kit.

Click on any of the links below to go to that section of the site.